I wake in the wrong world again
For many months now, sleeping with scars,
machines, murders. The television whines.
The unintelligible heads spin corruption, lies.

I wake in the wrong world again,
go out into my small garden. I smell
the earth. I rip the dry and grey from the black,
earth clinging to roots, a pile at my feet.

I replant tender mosses, herbs, flowers.
Everything useful or beautiful.

My husband calls me greedy.
I grow a new world to sustain us.
We have no choice but to live with the evil.
We will have sanctuary, cushions of home.

I wake in the wrong world again,
but my garden grows. 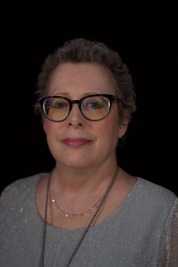 Leigh Allen has published poems in The Texas Poetry Calendar (2016 and 2017), Illya’s Honey, Red River Review, and has a poem on Urban Acres’ website; she has published essays in The Gilded Serpent and Papyrus. Leigh is a charter member of the Richardson Poetry Group. She has worked as a professional legal assistant for more than 20 years, is a long-time student of Middle Eastern dance, and lives in Carrollton, Texas, where she composes most of her poems on her daily commute. 2016 also finds her a cancer survivor.