The fan’s wings flutter and tulip the pages,
Freeing the lined paper. The first three stages
Of a well-told lie are always half-truth,
Half-truth, and half-truth. But when a nib’s tooth
Is pain-hijacked, deceits fill in the cages.

They roll out in spurts, like the spent rages
Of an untombed mummy who still engages
To rule worlds with the hauteur of its youth
The fan’s wings flutter …

The mummy’s scream echoes through the long ages
Of words scratched onto limp sheets. It gauges
The depths of our shared abyss. ‘I speak sooth,
It cries. ‘Unleash my wrath. Break these uncouth
Chains, and a kingdom shall be thy wages!’
The fan’s wings flutter …

With a tail-flourish I write down neatly
The last lie: ‘I am learning to butter
And to eat all my muffins quite calmly.’ 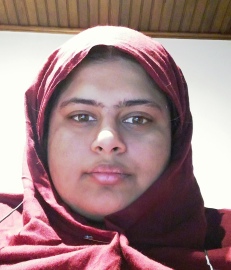 Hibah Shabkhez is a writer of the half-yo literary tradition, an erratic language-learning enthusiast, a teacher of French as a foreign language and a happily eccentric blogger from Lahore, Pakistan. Her work has previously appeared in The Blue Nib, Cordite Poetry, Headway Quarterly and a number of other literary magazines.