The hallway seems dimmer, the door worn and scratched.  Did it really deteriorate this much in a few weeks?  Or were you so focused on seeing Cassandra and soaking up her citrus scent that you never noticed?

Now that she’s left you’re drowning, especially at night. In the dark you see Cassandra’s curls, but when you lean into them your cheek touches a bare pillow, her curls mere shadows and memories. The pain in your gut is real, though.

You put your eye to the keyhole and the world brightens.  You see yourself at the piano, playing a song she inspired. She stands behind you, delicate fingers touching your shoulders.  You inhale deeply, longing for her citrus scent, but all you smell is the musty hallway.

You picture the two of you in the tattered yellow chair that sat where the piano now sits, you drawing out her thoughts, rewarded by her insights into everything you care about.  At first you had the wisdom, but she gained her own.  Too much, perhaps.

Your pocket buzzes.  You met Eliza last week and dove in, hoping she would bring you back to life. But the intoxication is already gone. You text her and return to the keyhole.

You see yourself at the window, facing Cassandra, smiling.

It stings to recall her, smiling but shaking her head.

The next day, a box packed with the refuse of your relationship appeared at your door. You haven’t seen Cassandra since.

Eliza’s calling now.  You hesitate but give her the address.

Kneeling in front of the keyhole, you see only the empty room.  Music on the piano, decanter half-filled on the bar, dying flowers on the table.  Would it have made a difference if you’d brought her flowers? Maybe you were too harsh, chastising her when she called about giant spiders and a bird cawing in the middle of the night, turning your phone off if she called too often. All you’d wanted was for her to overcome her anxiety and reach her potential!

Staccato steps announce Eliza. You unlock the door and push her through.

You have sex with lust and anger, biting and sucking, smelling nothing but soap. Entering her, you watch her face and try to block out Cassandra’s perfect features.

“If you don’t stop, Ma’m, I’ll charge you with resisting arrest AND trespass.”

Eliza sobs as he leads her out.

“Let’s go.” The officer pushes you into the main room.  You see Cassandra and your blood races.  Everything else fades. The two of you are alone.

You put the key on the piano, watching Cassandra closely. There’s a glimmer of something in her eyes.

Smiling, you offer your wrists to the officer. 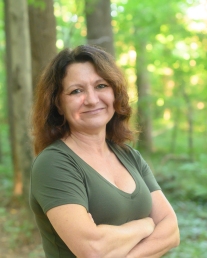 Christie Marra is a native New Yorker who works as a legal aid lawyer and teaches dance fitness in Richmond, VA. Her short stories have appeared online in Little Death and The Write Launch and in print in The Fredericksburg Literary and Art Review.