He falls away
from the quarrel of tongues and lands
on his fingertips, the right hand’s
showing pluck while the left’s display

lithe devotions
before their triune god, the Chord—
who was there, sounding, when the Word
came crawling out of the oceans. 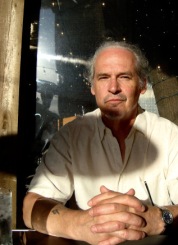 Steven Reese’s work has appeared in The Journal, West Branch, Poetry Northwest, Atlanta Review, and a host of other magazines, as well as in three collections: Enough Light to Steer By (Cleveland State), American Dervish (Salmon), and Excentrica: Notes on the Text (BlazeVOX, forthcoming). He has as well two volumes of translation, Synergos (Etruscan; poems of Roberto Manzano) and Womanlands (Verbum, Spain; poems of Diana María Ivizate González). He directs the Northeast Ohio MFA in creative writing.