Clad in robes of sorrow, our aged relatives
bade us a tearful farewell at the wharf,
openly wailing as we were crammed into the craft
by truculent smuggling gangs anxious for Euros.
When the careworn turn desperate,
even the louche are greeted as lifesavers
and due diligence becomes a risible luxury.
After all, as refugees we ourselves had become
a suspicious demimonde regardless
of our past statuses before wartime;
now, as we unmoored from the slip
and Libya to chart our course for Italy,
under sunny skies and upon calm waters,
we were reduced to human cargo
at the mercy of weather, nature, and fate,
hopeful for a reprieve from life’s vagaries.
We knowingly traded dangers: violent upheaval
for a treacherous sea crossing,
and, at wit’s end, we all took our chances.
Midway, with Malta and Sicily in sight,
seepage flooded the bilge whose pumps failed.
The ship began to capsize and founder,
dumping us headlong into glaucous seawater
which we treaded till our limbs surrendered
and we plummeted with salty mouthfuls
into the lower depths, toward deep-sea kelp forests
and sponge fields where we were mutely welcomed
by ancient vestiges of vessels Roman, Carthaginian, Greek.
Soon our bloated corpses will surface and testify
to the tragedy of our plight, whose startling images
will rattle the civilized at breakfast, though they are
already running late and rushing to embark
upon their morning commute, a transit less perilous
than our own doomed passage and with time enough
to be fleetingly mindful of fellow travelers. 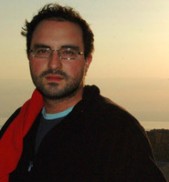 Brandon Marlon is a writer from Ottawa, Canada. He received his B.A. in Drama & English from the University of Toronto and his M.A. in English from the University of Victoria. His poetry was awarded the Harry Hoyt Lacey Prize in Poetry (Fall 2015), and has been published in 100+ publications in Canada, U.S.A., England, Scotland, Ireland, Spain, Greece, Romania, Israel, India, Pakistan, Thailand, Singapore, South Korea, Australia, South Africa, Nigeria, Trinidad, & Mexico. http://www.brandonmarlon.com