Ironic, non, her palette’s chaperone beyond
the glass where, sans daughter, sans her
child’s simpleton pere, this prince cheeks

at last of light’s un petit movement.
She daubs his eyes’ blue tinder. She buffs
black his lashes’ curl, his blink parched

gray his brow’s furrow, such fallow expanse
as will, soon, crown his pate a withering
brown, an ashen tint winter’s ember. Couer,

he paints, dans le temps, not in prescience yet
impressed from his looking down on her, his idee-fixe
against females the Beaux-Arts’ same, irony,

oui, for how she sheens his countenance,
harvesting such embers as M. Guillotine’s silver
slices fire, forges the Court’s fallen, au pan 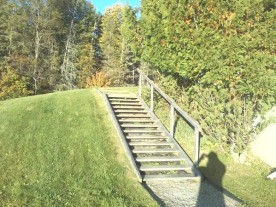 Ray Marsocci’s work has appeared in such literary magazines as Green Mountains Review, La Fusta, and Quarterly West, as well as online at The Algebra of Owls, Carcinogenic Poetry, and The Smoking Poet. Having returned to Vermont after nearly thirty years away, Ray Marsocci continues trying retitle the novel upon which he works, living isolate atop a high hill, in a gorgeous house, with the owners’ cat and winds that rock the walls tremolo.