The blue light glows
inside the snow fort
and the yellow light leaks
in at the seams
and both lights play
against my exhalations.

squeaky snowpants muffled,
and this is all of it—

no hide and seek breathlessness,
no hoarding of snowball ammo,
no playing ice-house

just the quiet,
the soothing lonely,
the huddling inside a cave,
filling it with the long puffs
of my own frozen breath.

For the dollhouse: rearranging

furniture and mismatched dolls
into meticulous
and suggestive tableaux;

for summer’s mud pie kitchen:
that hole in the dead tree trunk
is the oven, and you can add rocks
for berries and shredded grass
for coconut.

But for the snow fort, play
at solitude—no furniture, no industry—
just the blue silence
and maybe a taste of fresh snow,
the metallic cold of it,
the inexplicable dryness,
its refusal to quench.

By tomorrow, someone
will have punched or stomped it
back down into a pile of snow-rubble;
and I will be ruined by the senselessness of that violence—

my heartbreak
dark as the solstice,
lonelier even than a hole in the snow. 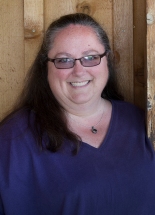 Liz Ahl lives in New Hampshire. Her most recent chapbook, Talking About the Weather, was published in 2012 by Seven Kitchens Press. Her second chapbook, Luck (Pecan Grove, 2010) received the New Hampshire Literary Awards “Reader’s Choice” in Poetry Award in 2011, and her first chapbook, A Thirst That’s Partly Mine, won the 2008 Slapering Hol Press chapbook contest. Her poems have appeared recently or are forthcoming in Bloom, Measure, Pea River Review, and Tidal Basin Review. She has been awarded residencies at Jentel, Playa, The Kimmel Harding Nelson Center for the Arts, and The Vermont Studio Center.