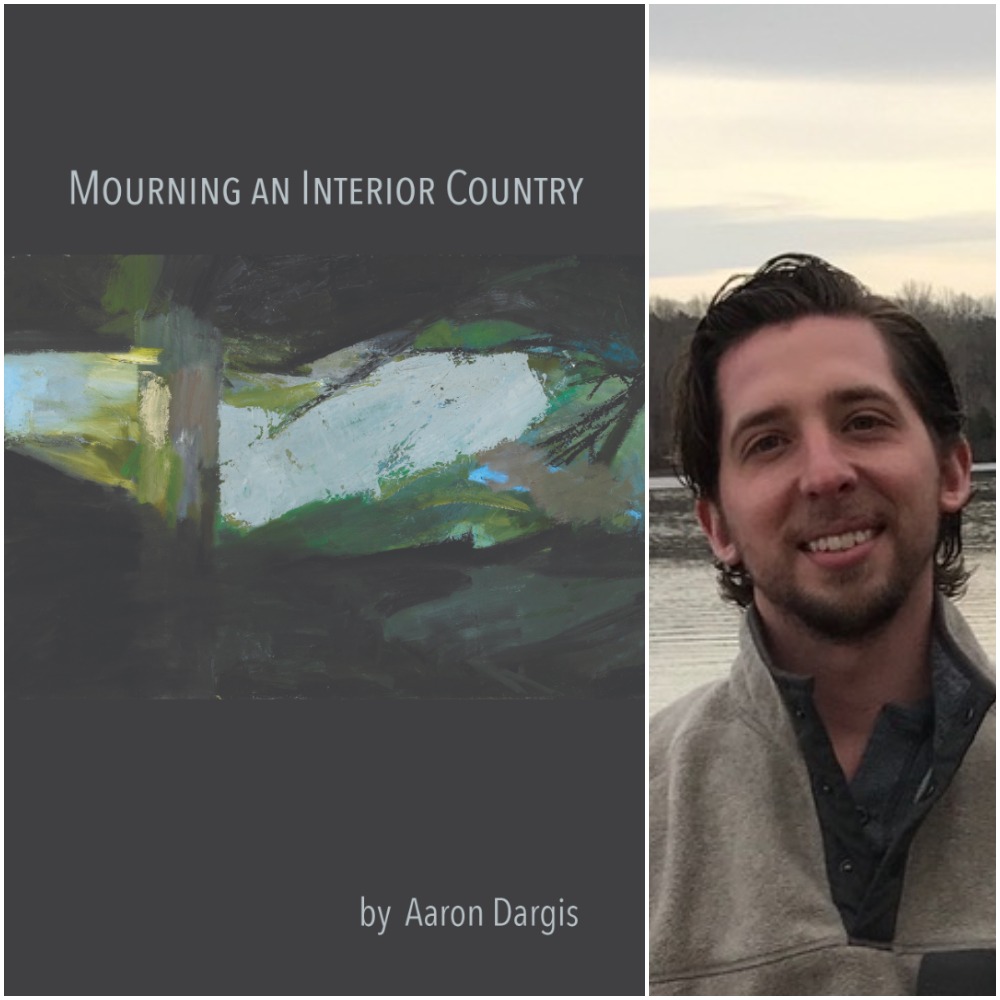 Aaron Dargis’ opening poem “The Garden, Ars Poetica” in his chapbook, Mourning an Interior Country, draws the reader in with its beauty and stark contrast between parched dry crops and living green weeds. In his collection of thirty-two poems, he describes interior countries of geographical as well as psychological landscape. Just as the “ear is to the soil listening,” readers will attentively listen to the voice of this poet with acute awareness, a recurrent theme throughout his poetry.

The terrain of northern Michigan, Lake Superior, Keweenaw Peninsula, Au Train River serves as backdrop. The reader feels the cold in “wind cuts wool and cotton to bone.” In this fierce climate, the poet questions the purpose of memory, the past, and fear, yet dives into those areas as surely and fearlessly as he “dives into the lake.” Repeated imagery of tangled reeds, lily pads and brambles suggest a tone of fear and being trapped, then again diving into the thing one fears.

Written in first person, the poems reveal a speaker who is on a painful journey to the interior country of self where the often stark terrain serves as metaphor. The speaker searches the past, revisiting places of childhood, towns, neighborhoods, homes, admitting he’s searching in “Map as Self-Portrait.”

I’m learning to remember lost time–
Those lakes of the mind have dried, filled
my reservoir of loss.
Rivers cut deep. I’m trying to find places
I haven’t been. Where deeper into
interior country is now foreign–
what leads the heart to such depths?

Though the mood is often solitary, and the journey is within, the reader is grateful the speaker is not always alone. One first meets the other in a pair of companion poems “Kitchen Sink” and “Mourning an Interior Country.” A woman waits patiently for him to come home, “fiddle the doorknob– liquored, speaking gently for my body,” and he does, knowing someone awaits, “I fiddle the doorknob, shoulder into the kitchen.” She appears throughout the collection smoking, unpacking, comforting in various ways.

All the poems are meditative, but it’s apt to have a group of small poems entitled “Meditations,” ten concise powerful moments reminiscent of the brevity of haiku minus the form. Repeatedly, we read a comparison of wind and the past, for example, in “Painting Au Train,” “Winter Meditations in a Cabin V,” “An Oak, Ars Poetica.”

The poet uses contrast effectively by moving among seasons and place randomly, including the occasional hot day or poem about a southern state, and although the pace is mostly slow, even a surprising allusion to violence, “I fired into a frozen pond.” The reference to the gun, although infrequent, suggests the conquering aspect of nature. The brutal image of a dead swan accompanied by paw prints of a coyote reminds the reader of nature’s violence. In contrast to contemplation, the matter-of-fact admission of drinking a fifth of whiskey one day, drunk howling at the hot day, or hungover give the reader a glimpse of a man with (forgivable) flaws.

The interior of Northern Michigan is populated with birds of every feather; the speaker observes, and describes the red-winged blackbird, grey partridge, grouse, robin, finch, among others, noting their behavior, sometimes envying them. The lush landscape is home to calves, a doe, and salmon, carpeted with grass, moss, ferns, and stone, canopied with leafy trees and clouds. It is blanketed with snow, and its thirst is fed with lakes and rivers.

The stark interior of the mind is painted with questions: somber, dark, lonely and mournful. The speaker expresses himself quite well even as he questions his ability to express his feelings. With one vivid phrase and image after another, Aaron Dargis pays a haunting tribute to memory and time in the gorgeous fertile setting of Northern Michigan.

Aaron Dargis grew up in Michigan and lives in the foothills of South Carolina. His poetry has appeared in catheXis Northwest Press, UpNorth Lit and Panoply Magazine. This is his first publication.