This is where the whales died.
Where white fences propel down narrow
streets, parallel to the uneven brick sidewalk
that juts at odd angles like a flensed hide,

wildflowers choose their own colors,
in the cracks and hanging baskets mold reds,
blues, and yellows into the shackled world.
Downtown buildings, white with pillars

filled with the black ink poured and wiped
remind visitors of the life given over.
Where Ishmael might have tied his horse
in the steel rings of black horses rust striped

and posted in front of each home. Where
the harbor mud releases heat, The smell of oysters.
Where Bernard brings the propane flame, a grate
and a used-up wheel barrow to prop there

over the flame, a base for the pot, the red-
brown, still-alive lobsters dropped into the roiling
water, claws flapping like gulls hounding fishing
sloops come to port, sea beyond sea, all he said. 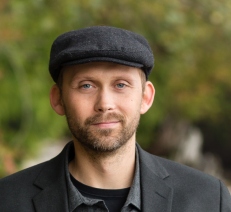 Jeremy Voigt’s poems have appeared in Gulf Coast, Post Road, Willow Springs, Fifth Wednesday Journal, BPJ, and other magazines. His manuscript, Estuary, has been a semi-finalist for the Dorset Prize, The Crab Orchard first book prize, and the Miller Williams prize. He lives by a large lake in western Washington.