(Editors’ Note: From the series, “Marginalia.”)

Everything was celebrated to sanctify the gods
in physical competition games for the best
of young people in a eucharistic rapture
by the miracle of the beauty of naked bodies
Pindar watched and sang of his deeds
in a meter surrounded by enchanted music
praising the heroes who embraced
in the heady contest of the victorious end
on the run, on the fight, on the throw, on the run
of horses, in the jump, culminating in the pentathlon
demanding to be closer to the gods
with winged acts of courage in the favorable day
to the gnomic sentences warn the best
that the gods wished to bless in luck
in the transmutation of fate even happier
for they were crowned with the olive branch 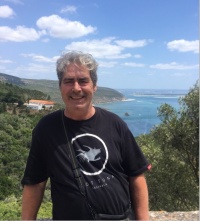 Januario Esteves is a Portuguese poet.