How strange a thing it is
to stop short in the kitchen
mid-peel over the trash
and marvel at the translucence
of a tangelo slice,

sunlight plumped inside
a thin skin so easily burst,
shadow of the pit
a bit forward in its demand
to be granted analogy.

Perhaps it is the second or third
meaning in a poem,
mysterious and indistinct
but clearly visible
when one holds the verses

up to the light like a color slide,
though application of force
to squeeze it out mars form and feeling
and makes a gushy mess.
Maybe let the seed be

and eat it with the rest – it may
gestate inside a while
and become nothing, just break down
and expel, or maybe it will stick around,
settle into your cells,
which is what it intended anyway. 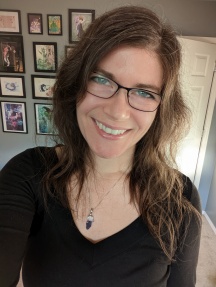 Carol Edwards is a northern California native transplanted to southern Arizona. She lives and works in relative seclusion with her books, plants, and pets (+ husband). She enjoys a coffee addiction and raising her succulent army. Her work has recently appeared in Otherwise Engaged Literary and Art Journal and Red Penguin Books. Instagram @practicallypoetical Twitter/Facebook @practicallypoet.