My mother’s delicate hand first floated
lightly over a strand of my hair poking sideways.
Now she holds a bristled weapon
that tugs at the tangles and snarls with violent, endless strokes until finally
she will touch the sun-washed sheen tenderly again.

My husband’s fingers toughened by weather lingered
in the swirl of my hair, a whispered touch.
now those tresses are entangled in his grip
as he annihilates my carefully constructed seawall with relentless devotion. In the wake, he will wind a lock around his finger absentmindedly as we watch the morning sun.

My daughter’s purple painted nails flicked
my messy ponytail and she tugged me from the kitchen counter to the sunbathed patio. Now her fingers crawl through the filaments and I feel a prick
as she plucks a gray strand, and another, hunting and yanking and talking.
She’ll talk until the tweezers aren’t needed to remove any distance between us, until
she is ready to press her face down and mix her tears in my hair.

The hands that set the sun in the firmament of the heavens knit me
together strand by strand.
Now he fills his hands with lightning and commands it to strike its mark
and I stand scorched, ruined, head thrown back until finally
he whispers that each hair of my head is numbered. 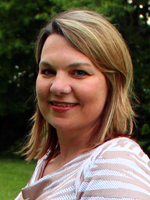 Heather Gemmen Wilson earned her MA in Creative Writing, and her thesis was selected as the Outstanding Creative Project. She also earned her MFA in Creative Nonfiction. Her memoir, Startling Beauty, sold over 20,000 copies and has been translated into 9 languages. She has over 20 children’s and youth books, including one bestseller. She enjoyed a 20-year career in book publishing before teaching writing courses to undergrads.