The bones I want to pick with you
were rattled in dice cups across time,
scattered on cool cave floors,
bubbled up in tar pits,
buried under the cobbled stones
of Leicester.

Just last week someone
dug up a jaw bone in Siberia—
a one-hundred-thousand-year-old
relative to Tibetan sherpas
whose DNA protects them
from altitude sickness.

Skeleton keys unlock
the dusty doors
to charismatic creatures
of the Burgess Shale,
the fossils of pikaia—
tiny eel-like swimmers
to whom we owe our spines.

Our two hundred and six
some odd bones stand
against gravity, persist
as osteoblasts. Ooze
pliant goo to mortar
caged up mineral into stone.
Then osteoclasts scrape
our ever-crumbling walls
for new collagen spackle.

What did her pelvis
tell us about La Brea Woman?
That she was female,
based on the shape of her bones.
That she was ten thousand years old.

Nothing can be said
about the color of her skin
as bones can’t remember legends
summoned from choirs of genes,
their harmony gone silent
after five hundred and twelve years
of singing to the tar.

And what of Richard the Third, known
for his warrior hunchback? He slept
in fetal pose under the streets of Leicester,
his bones played into xylophones by lowly scoliosis. 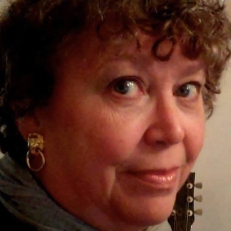 Roberta Schultz is a singer songwriter, teacher and poet originally from Grant’s Lick, KY. Her poems and song lyrics have appeared in Pine Mountain Sand & Gravel, Still: the Journal, Motif, Waypoints, Kudzu, Main Street Rag, Riparian and other anthologies. Three of her chapbooks are published by Finishing Line Press.