For some reason, the clouds have piled against the edges
of the sky, left a playground for the sun—a gift,
though a cold breeze brings the north a little closer.

We leave the shingle for the sand, jumping rivulets
seeping from the cliff.  We counted stairs
on the way down–important thing to know.

The sand is compact, rippled where waves broke
near the strand; our footsteps, large and small, are faint
(and temporary anyway). He is hunting crabs

and hurries on to where the rocks again emerge.
My job: to overturn the largest I can manage, and smile
each time he exults at creatures smaller
than his palm. He’s done with springtails,
though they engaged him briefly
in seaweed strewn along the high tide line.

There is no end to rocks, no end to tiny pools beneath,
no end to wonder.  The eel is a bonus, desperate
more for cover than for water, writing s’s in the sand.

Starfish inexplicably clustered beneath a smallish rock
are almost enough to satisfy, but he will find a stone
that I must carry, and a shell, before we go.

I help him jump the larger rivulets, but he braves
the smaller ones himself. Then, hand in hand,
we climb the stairs.  Short of breath, I count out loud. 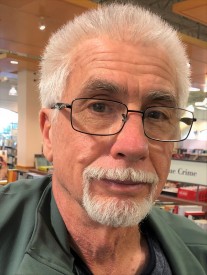 Hugh Anderson has grandchildren and thus the world gives him nightmares. Recent publications include Grain, Vallum, Right Hand Pointing, The Willawaw Journal, and Praxis Magazine Online. He has one Pushcart Prize nomination.