Schrödinger’s cat ended up in a box
through an error in translation.
There was never any box.
The cat had everything it needed for life.

What there was was a diabolical device
in the spacious room the cat has been given.

the very act of observing something changes it

By the end of the year my grandmother was born
there were two theories about very small things
and both were right.
The previous year, there had been none.

Some things are too long to see:
radio waves, the whole truth,
the end of the rainbow of history,
even if everything is consciousness.

If everything is consciousness, then who is thinking:
bombs bring peace? whiteness is better? trees are paper?

If seeing something changes it,
who should step in front of a mirror?
Who should watch a murder?
Who can be let into a peaceful meadow?

Who will work with the sociopathically enraged?

before we know what’s going on? 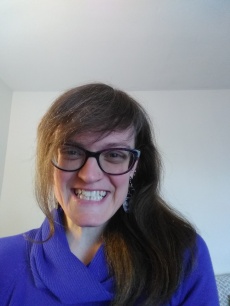 Megan Wildhood is a creative writer, scuba diver and social-services worker. Her poetry chapbook, Long Division (Finishing Line Press, 2017), ruminates on sororal estrangement and volleying the challenges of growing up on the planet that’s very nearly on fire. An excerpt of her novel manuscript was published by AMP Hofstra’s literary magazine in May 2019. Her other work has appeared in The Atlantic, The Sun, and Yes! Magazine. She regularly writes for Real Change and Mad in America. You can learn more at meganwildhood.com.