Oma and tante
clucking over foil in German
bending it, opening it, balling it
their amazement like music.

I learned German like that
(the best way to teach a child
another language is
to say in it the things you
don’t want her to understand).

She was my first death
first ache of mortality, and
without her, life still feels
incomplete. Since
she died, life is only
something I slip into
each morning.

When I walked through the cemetery
in Bethel with Andrew, I choked
even though I never met his father or
anyone else there.

It was hard to learn
even to spell cemetery
all those  ‘e’s
each one said differently
as if another language. 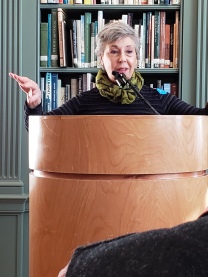 Ellen Sander’s Trips: Rock Life in the Sixties was reissued in an “augmented”edition by Dover in April, 2019. She was the Poet Laureate of Belfast, Maine in 2013 and 2014. Her chapbook, Hawthorne, a House in Bolinas, a versified memoir, was published by Finishing Line Press. Her next poetry chapbook, Aquifer, will be published by Red Bird Chapbooks. She hosts and produces, Poetry Woodshed Radio, airing locally Tuesday evenings on WBFY in Belfast, Maine, USA, and streams live on the internet from the station’s web page. Poetry gets her up in the morning and keeps her curfew at night. In between, the chatter of constellations rattle her.