The Terribly Attractive Older Women’s Club was meeting in the corner of Panera Bread when Melville walked in.  First, their brilliant jewelry and pink Race For The Cure t-shirts caught his eye, then their neon Adidas running shoes.  He walked to the counter and ordered his veggie half sandwich and cup of French onion soup.  Taking his green tea, he sat down and waited for his food.  He couldn’t just sit there, so he opened his day planner and looked at the big bunch of nothing that awaited him this weekend.  Then the number for his order was called and he went up and retrieved all 660 calories of it.

Melville was fat.  Not big-boned, not husky; from infancy on, he fought obesity to a stalemate.  Pushing fifty years old, he now resembled an upright rectangle.  Bowling shirts were invented for people like him.  All through school, the irony of Melville’s name had dogged him.  Twenty-four miles a week walking and he was still Moby Dick.

The sandwich was delicious, and he savored it in tiny bites while letting the end of his baguette steep in the soup.  Today was Thursday; three more days until football at Wilson’s house, the two of them eating all they wanted and comparing the week’s sit-ups, miles, and arm curls.  Then the week would begin again, the eight-hour days at the call center, then walking the same track and trails and counting his calories.  If he ever won the lottery, he would buy this Panera Bread and burn it to the ground.

“I see you at the track all the time.  You’re tireless.  Good job!”

The woman had stopped by his table.  Now, as he looked up, she moved on and out the door.

Well, all right, then. 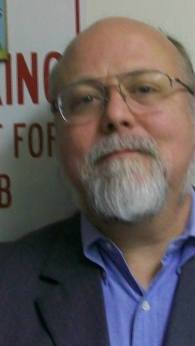 Robert L. Penick’s work has appeared in over 100 different literary journals, including The Hudson Review, North American Review, and The California Quarterly. He lives in Louisville, KY, USA, with his free-range box turtle, Sheldon, and edit Ristau, a tiny literary annual. More of his writing can be found atwww.theartofmercy.net.