(Editors’ Note: We’ve set a precedent by publishing these three pieces together. We think you’ll agree that they have a commanding cohesion.)

Classes, no matter how informal,
are still classes at three times a day.
A tug of war, whether it’s with a tow-

line or a spider’s web is still a matter
of balance, stance, footing, and grace.
By not pulling one’s punches, one can fall

between the cultural cracks of being
Lieutenant (junior grade) or Nipponese.
The once a month embassy visit

to nab a paycheck and the mandatory
officer’s soirees, ensures a retread.
But Tokyo is unbearable to foreigners

during the muggy summers, hot and sticky,
even for a Dallas native. A retreat
is accounted for in Karuizawa.

Yukika is fresh air
against the face of trouble,
a port in the storm of war,
and rumors of war. Prepared
to share private insights
of zazen, the art of sitting.
Yukika illuminates and validates
spiritual winning
while shedding light to bring
reality to earth,
grounded in education
and wisdom, she finds truth
in the practical. She pushes
aside subversive talk,
with no desire to encode
or cipher, she deciphers
in plain speech – her worries.
Her father, Tokyo’s Mayor, was
imprisoned during The Great War
for impassioned arguments
of peace and she expects that
Father will once more be jailed
in the coming months,
for what he rigorously believes.
Yukika pulls the Texan aside,
to whisper a warning,
to be taken sincerely:

“Tell your people that if you push our people
“too far – and you have – they will strike you.
“Without warning. Make sure you tell your people.” 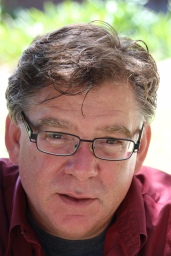 Robert Hoffman is a retired poker dealer and lives in Lakewood, California with his wife of 40 years. These poems are a detail of a narrative in verse. They focus on the moment just prior to World War II in Japan where the last of the Linguists will soon find themselves behind enemy lines if they can’t find a way out.