In those years of heat and light we were on fire with syllabus,
we were grease-pummeled and sweated into ashen brown

with salt and human blood. The stain of health
coated our fingers as we inhaled the powder of it,

the smudge and smear of earth, while fate licked icy
beneath the ribs, fate, that cracked and broken

bean that turns to ooze. Is it true the Aztecs
believed hummingbirds represent the soul of warriors

died in battle? Meanwhile the wind blew like a mariachi playing
a trumpet at midnight. I lost you there. The season

was full of ice and the current flowed so fast. 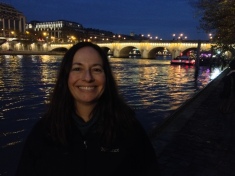 Kathleen Boyle’s work has recently appeared or is forthcoming in numerous journals including Zyzzyva, Natural Bridge, Poet Lore, and The Bellingham Review. She was recently nominated for her first Pushcart Prize.