[Connor attempts to feed his estranged family in a flat-lining economy.         In between jobs, he roves the streets and rails looking for meaning]

1.
In the Orcan field we found a potato to feed one in four families.
There was no shore that Blake could find kinder than the one we rowed toward—the
movement of shoulder put against the shoulder of the foul wind, O row, all row.
Ignore these misaddressed statements of intent.
The seemingly dead dandelion seeds her young among the barbed wire.
You can only make so much of meaning without sustenance, this language used to be enough for
me.
We sat around like un-watered plants, we patriots
galloping—suicidally beautiful.
Loving my children I slipped this pamphlet between the leaves of Blake’s
manuscript.
Bring up your tired.
Bring up your dead.
A man with a face branded in ashes.

Orcan stood among us and bade us to drink, feed our families,
become equals between these fine-red-glowing radiator coils.
We un-doused oarsmen staggered inland from the shoreline, stomachs betraying
our vocations of backwards motion, muscles tensed to the point we
shook and vomited.
The fattened land moved upon your tired hands, ignoring all
misaddressed statements of their intent.
Bring up the yellow dandelion among barbed wire.
You can only make so much out of meaning, the language no longer enough for
us
a human with a face branded in ashes.

2.
Who is this man with the ashen handprint on his face?
The crisis management team was meant to assess how best to
leverage the vulnerability of the bereaved.
Schools, by proxy, become micro-economies.
Each neo-liberal rebirthed on the campus a means to differ action
against the epicenters of money and the needless growth of
abandoned buildings.
A well manicured lawn is a symbol of one with a sound investment
plan, just ask anyone that survives Detroit or the Dustbowl.

Sound investments symbolize a stepping away from your inner
plebeian—an interpretive dance upon the grassy knoll.
We remove all nervousness from our glass assassins.
Each of us a thrust dagger on the senate floor.
Each family erupts skyward into their own cave of sound.
Cry freedom when the levy breaks.

Cry freedom every time the Lusitania sinks.
This dance—of burnt cork and whiteface covers all poor
countenances branded underneath by her ashes—we are still here
dancing in her sinking belly.
Reach down into her engines to withdraw the sabre.
Withdraw the lion, withdraw your interpenetration,
withdraw your pension, your denuded 401k.
Reach down, withdraw your inner-city, reach down within our own
mouth and withdraw our own severed head.

3.
Reach down while the engine is still moving, a maze of severing.
Catch a single burnt-out sparkplug and retrieve it without losing your
finger.
Now replace it.
Remember the incoming mortar round, remember how you staunched its
passing
how you held him to your chest,
your hands a surrogate skin to hold in his
guts from where you un-birthed him,
your fingers still burn when it grows cold, but
he was the one dying from shock,
his spilt stomach
acid bonding your one flesh together.
You must do this.

Feel the last-rattle as you choke out the vagrant to take his place in
the last spot in the cattle car.
Feel his weight shift and fall away into the ballast running along the
tracks.
Carry your last tooth, its bluud spotting your hip pocket.
Close your child’s unstaring eyes.
When the aquafer went dry under the round, no one noticed until the grass blew
away into the caverns of the sky.

Eyes glazed by Oxycontin, Benzedrine, or put down by Xanax.
Reach down and stroke the vagrant child’s hair.
Krist on a crutch, Blowpop, brass-knuckles and the broken syntax
they spit through split teeth.
The Morse code operator died as the salinity rose in our rivers
disposing all water-life.
The body now nourishes Other’s bodies—one form flowing into
another—a crow on a wire fence—a spare tire in the limitless
field. 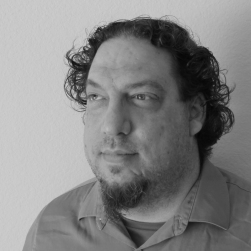 Michael Cooper is an inland empire poet, social worker and father of two great sons: Markus & Jonathan. You can find his work in The Berkeley Review, The Portland Review, The LA Review, H_NGM_N among other fine publications.