What an odd pair we make—all eyes studiously ignoring
this back and forth in two tongues.  I’m trying to keep him in line,
but he’s all about trying the water cooler with its red lever for caliente
since we have no hot running water in the barrio. He’s all over the place
here at the bank, but he’s at home in his mother’s native Spanish,
and we will stand for another hour or more while the line snakes around,
conversing in two languages while all who wait will understand his shrill,
piping, three-year-old responses to what must sound like gruff, guttural noise.
The Costa Ricans all know one another; everyone is a cousin, and
every cousin can be used to save a place in line. We are the odd pair out.
I already feel him receding from me like the nameless ancestors who lived
and died with no thought given to this strange eventuality—my boy and me.
The line has proceeded by a third. With two thirds to go,
I feel myself diminish and retreat. A great sadness settles in.
Will he be able to name me in my own language?
Will he even remember that we spoke?
“Daddy,” he tugs my sleeve, “quiero ir a la casa. Vamos.”
I’m as fond of him as is possible.  My commands
turn to kissing and tousled hair. I have decided
to stop dividing life into quarters, and to begin
dividing it into thirds. When I get to halves,
I feel that I may finally know something. 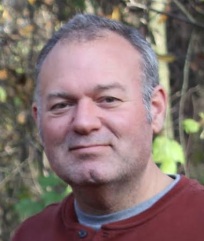 Tim Hawkins’ fiction and poetry can be found in many magazines and anthologies and has been nominated for the Pushcart Prize, Best of the Net and Best Microfiction. He is the author of: Wanderings at Deadline (Aldrich Press, 2012), Jeremiad Johnson (In Case of Emergency Press, 2019) and Synchronized Swimmers, (KYSO Flash Press, 2019). Find out more at: www.timhawkinspoetry.com