Remember when
your child’s heart led your head
like a garden snail’s head leads its footed belly.

Think back to when you were seven
& your adopted pet / school project, Kiddo,
gnawed away at a slice of banana on a glass slide
as you watched, thunderstruck, from beneath him
(find out on Wikipedia that he was using his radula
a structure akin to a tongue used by mollusks to feed).

Recall how proud you were of Kiddo when he not only lost
the school snail race, but redefined it, by turning around
at the half-way point, staying in his own lane, & crossing
the start-line before any of the other snails reached the finish.

Wonder why your teacher didn’t mention anything about Kiddo
& his compatriots being hermaphrodites, or how (if they chose)
they could all be both father & mother to their tiny-shelled progeny,
& realize how simple it would have been for her to call a snail’s powerful,
innate mechanism of retracting its tentacles into its head for protection
by its technical name: invagination.

Then, understand, finally, that if you’d been born with the ability
to operate yourself like a puppet, & pull yourself outside-in
by drawing your head down into your belly & out
through your foot, to invert your once-vibrant
body into an empty sock, how many times
you would have done exactly that. 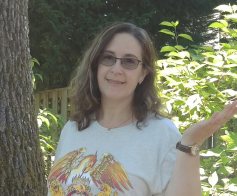 Stephanie L. Harper lives with her husband, two teen children, in Hillsboro, OR., where she performs the beatified deeds of a home schooling parent and writes poetry, sometimes simultaneously. Her poems appear in Slippery Elm, Rattle, Figroot, Califragile, and elsewhere, and her chapbook, *This Being Done*, is forthcoming with Finishing Line Press.