Say you’ve spent your adult life
assuming you’re going to die
young, and it turns out you don’t.

Say the lifeline on your palm
insists you’ll be dead at thirty-six
but here you are aged fifty-four.

Say the descent beckoned before
you’d even reached the crest,
before you’d even lost the whiteness.

Say you spent your forty-eighth year
thinking of your dad who died that age –
too young – and all you felt was old.

Say your friends start dying, too soon,
and unexpected, when everyone
had always assumed it would be you.

Say you asked a Buddhist monk
at a funeral and she laughed and said
It’s about five words long. 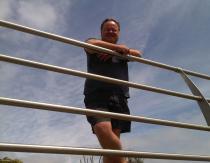 Gary Twynam tries to make a living out of the things he loves. Management training, writing and gambling. Snoozing also. Income varies.