An editor said never start a poem at a window,
so instead I’m looking at the door,

which is made of glass. We are to avoid rain,
too, but it streaks the pane in such delicious

patterns that I can’t help but pretend to be someone else
in a foreign city, perhaps Helsinki, sipping black coffee

with a mysterious woman younger than my daughter
(who also does not exist), whose interests

in me are purely literary, although she straightens
my collar with lingering, scented fingers. Garden

memories and birds must never populate our lines,
but corpses are fine, as are tube tops and bananas

and any combination thereof. I finish my coffee
and wander alone through cobblestone streets,

stepping over clichés when possible, kicking them
aside when my hip joint argues, or simply accepting

their useful limitations when nothing else works.
Unknown and lacking credentials, I shrug, go on

past the closed doors behind which unseen bodies
perform the most bizarre and sensual solo dances,

or not, and shadows cook sausages over fire
and the grease spattering onto the tiled counters

where cloudberries are sometimes found.
I know little of Finland, and less of myself,

and then there’s poetry, which remains a blank
frame, a frosted pane I’ll never truly unlatch. 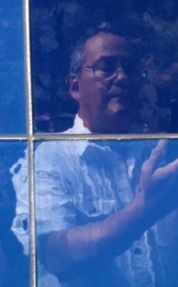