Born before midnight, a ceiba flower
on her head. She was held upside down
near a concrete bridge that crossed oily water
running from estuary to river plate. She developed
hair, bark, nails, ears. Her leaves unfolded quietly, unnoticed
her penis grew much later, under branches that turned mossy, hardening
as days became hotter. He travelled south, to the exact spot where his parents left
him unguarded. Wild dogs took care of him, nursed him under rows of lemon trees.
He developed fruits devoured by passerine birds, mice, flies. His seeds never sent roots down
they expanded horizontally, from where half women-half jay birds appeared. There is a plaque
that recounts his life, and that of his descendants. It lies hidden under English grass that grows finely

When he dreamt, it was her who spoke to him
in another language, from another land.
She asked to be remembered
as origin of his story
every time he saw
Ceiba trees
flowering
colours
ablaze. 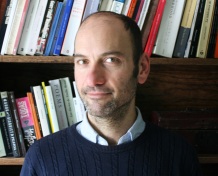 Leonardo Boix is the first Latino-British poet to be selected for the Complete Works Poetry (mentored by Michael Schmidt), a UK national programme.
His poetry will be published in the next Carcanet New Poetries anthology as well as a Bloodaxe anthology, both in the UK. He has been published in Modern Poetry in Translation (MPT), the Rialto, Magma Poetry, Minor Literature [s], The Morning Star, Ink, Sweat and Tears, An Other Poem, Under the Radar, and elsewhere.

Editors’ Note: We chose the unusual font for this piece because of the horizontal requirements of the layout. The widths of the lines appeared important to the piece.