At dusk, she and I drag mullet guts along the sand, teasing up the sandworms. They’re buried deep but when we drag fetid, fishy viscera along the sand, when we paint the beach with the stinky, they come wriggling. They can’t help themselves, no matter how vulnerable it makes them. Zombie worms, betraying the protective, wet sand; they push up, drawn towards danger. They want the blood. The carcass. It’s all they want.

The chilly, briny breeze is rolling in off the ocean. I have an old scarf wrapped round my head to stop my hair blowing in my face when we fish. Jeans rolled up my shins and I’ve got thongs with all the pictures worn off the rubber hanging from my toes. Beneath my threadbare canvas jacket, I’m wearing a bikini top, even though I never planned to swim. It’s too cold for that.

When we first went down the beach, I dropped the fishing rods and climbed up on twisted driftwood because the idea of sand worms writhing beneath my feet makes nausea slop in my belly. They will reach up with their soft mandibles, they will brush along the soles of my feet with disturbing gentleness and somehow wriggle inside me. It’s a childhood fear, from when my dad used to sink a shot can of snappy tom into the mud around the mangroves and yank up fat bloodworms to catch whiting. The sight of them, fat and oozing in the can was enough to make the bile boil up from my gullet.

Now, when the worm heads pop up with their flickering mandibles, when they make telltale v’s in the retreating waves, she calls me from my driftwood perch. I jump down, pushing away hoary thoughts of penetrative bloodworms. I get on my knees, jeans sopping, making my hands into trowels. Darkness is swallowing the dusk around us. With furious concentration, she and I dig them out, long, pale, serpentine things. They look like lolling, dead-lizard tongues; they squirm up in her pliers.

We scoop them up. 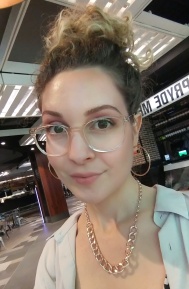