Basically it was our signaling system,
Purely desi, jugaad thing,
I would suddenly brighten the flame of the oil lamp,
Loadshedding days being common in our growing years,
Specially during group study ,
And she would lessen it,
This would continue for two or three circles,
‘Til we both smiled,
Our teacher, the local boy who had passed graduation and looking for a job,
Would rebuke us for being so careless about studies,
we really did not mind his rebukes,

For we had fireflies in us,
Fireflies. 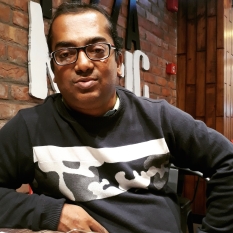 Moinak Dutta has been writing poems and stories from school days. He is a teacher of English in a government sponsored institution. Many of his poems and stories are published in national and international anthologies and magazines and also dailies including ‘Madras Courier’, ‘The Statesman’ (kolkata edition), ‘ World Peace Poetry anthology ‘ ( United Nations), ‘Spillwords’ ( published from New York,USA), ‘Setu’ (published from Pittsburgh, USA,)Riding and Writing among numerous others.