His crazy twin sister sat across the table from him in the kitchen of their basement flat. She watched him stuff his coat pockets with the tools he’d stolen from Wal-Mart. From behind the closed bedroom door off the kitchen, purred their mother’s snores.

“No one be out in this howl tonight,” crazy girl said.

He scowled. “They be someone for me.”

“You leave citizens alone. Promise me.” She grabbed his arm, squeezed so hard he had to punch her.

Her eyes watered. “You see citizens, ‘specially they be girls, you don’t bother.” She rubbed at the red mark his fist had left on her cheek.

He shook his head at her stupidity. It was two girls had held her down while the Warriors did her. Seven months ago. Someone had filmed it and burned DVDs. Sold them on the street. Crazy sister thought she was a movie star.

“Gimme your Polaroid,” he ordered. She shook her head, her beaded braids clacking and infuriating him with their clackety-clacking, her big pregnant belly pushing at his eyes. He ran to her bedroom, opened all the dresser drawers, dumped all her shit on the bed, grabbed the camera he found wrapped in a pair of her underpants, and left.

Outside, icicles stabbed from the gutters of dark houses. Snow swarmed and attacked, cut his face, bit his ungloved hands. The only things moving were him and the wind.

“Goddamn,” he muttered. Crazy sister was right. He shoulda waited for the storm to stop agitating. He’d figured wrong: that the storm would keep him unwitnessed. He hadn’t figured the storm would also keep away the targets.

“Goddamn!” he yelled, and began tossing tools from his pockets to make room for his cold hands. The hammer he flung bounced and banged the snowy street, and then something remarkable happened. The wind shifted. Suddenly, the wind was at his back. Suddenly, he was slicing easily through the storming white.

Up ahead, under a viaduct, a cigarette glowed.

“Praise be,” he whispered.

The wind urged him forward. He unzipped his coat to reveal the Warrior colors of his sweater. It was the rule. Show the colors when you did the test. His mama had knitted him that sweater, red and black, for his 12th birthday last month.

A tornado whirled through his guts.

He strode closer and closer to the winking cigarette. He removed an ice pick from his pocket.

The wind pushed him forward. The cigarette beckoned.

Afterwards, he hurried home, his hands warm in his pockets, the camera cradled in his left hand, the ice pick gripped in his right.

And when the time was right, he’d use the ice pick on his Warrior brothers, one by one. 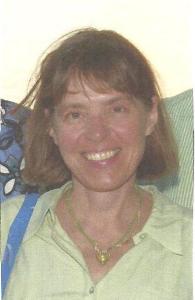 To date, 27 of Marie Anderson’s stories have appeared in various publications, including Brain Child, Passager, Morpheus Tales, Downstate Story, Woman’s World, and St. Anthony Messenger. She is the founder and facilitator of her library’s writing group, now in its ninth year. She completed two years at The University of Chicago Law School before escaping without a degree. She’s a married mother of three, originally from Chicago’s south side.