He began his rage in a quiet voice,
spoke to me in a voice as flat and cold
as Morse Code. I hate you, he said, You
are stupid and worthless. His whole body
made ready to hit me. His fists curled like
mutant anemones. Increasing pitch,
he repeated You’re worthless, then pushed me hard
against the wall, held me there. Your breath stinks.
Don’t you ever brush your teeth?  I tried to
cover my face with frightened hands. I could
not think of a thing to say. The discreet
voice in my head spoke to me: “I hope our
ham doesn’t burn. I hope I haven’t set
the oven too high. He hates burned food. His
mother was a terrible cook.”  Later,
soothing my face with cold water, I smiled
into the mirror. “Hey,” I whispered, “Hey,
the ham didn’t burn, biscuits were perfect.” 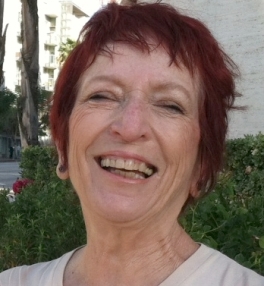 Martina Reisz Newberry’s newest collection, Blues for French Roast with Chicory, is available from Deerbrook Editions. She is the author of six books of poetry. Her work has been widely published in magazines and journals in the U.S. and abroad. She lives and loves in Los Angeles with her husband, Brian, a Media Creative.