I died for beauty, but was scarce
Adjusted in the tomb,
When one who died for truth was lain
In an adjoining room.
~ Emily Dickinson

Whose was the better death?
We fellow corpses began to compare,
as I posed in my long, lovely curls,
while he defended his shabby underwear.
I readjusted my gown and revealed
an undergarment of my own
while he ogled and scathed
wittily and I sang praise
of his beautifully crafted barbs.

Then we rested for an eon
or two, dead Beauty
and expired Truth. We touched pinkies
and clasped a promise, but as we did
First Love was laid out, and she
was as restless as ever.
We turned our faces up, stoic—
but I saw him peek and go quiet.
And then I sneaked one too and died
all over again. And that death was the best. 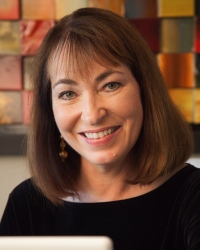 Rachel Dacus is the author of The Renaissance Club, a novel, hailed as “a poetic journey through the folds of time.” Her poetry collections are Gods of Water and Air, Earth Lessons, and Femme au Chapeau. Her writing has appeared in Atlanta Review, Boulevard, and Prairie Schooner. Dacus’ new collection, Arabesque, is forthcoming in August 2018 from FutureCycle Press.