w/my face against the cloud
and my ass against the burner
I’m cheering the ponies w/God.
Hold my calls I say. God nods
and collects in the third.
Always stick w/the filly He says
and of course he’s right. What other choice
is there for a guy still carrying
his chapbooks w/him
hoping for a sale? But I know better.
I love this ramshackle town he says
w/a genuine smile on his face;
a small rain w/o end in his eyes.
You guys are driving me crazy He tells
the beer man. And you, He says
You’re no better. Bogarting the chips ’n salsa.
I hadn’t noticed. So I moved on to the next topic.
What about Monet’s light I ask,
hoping He’d pick me a winner
before the last race. It colors Heaven
He says like some stock answer He pulled
from his hat but He didn’t have a hat,
just a carefree cloud that I guess he plucked
from Saturn’s tears. Sounds pretty I say,
trying not to sound too eager or envious.
Trying to hold the divine tighter than I had
just a few moments before when I didn’t
redress. Rejoin. Redeem.
It is He says and Garcia stitches sunlight solos
while Ella sings the blues.
We’re in the backstretch, God and I
coming to the understanding that we both
tried our best. Hey, y’know, you were human once
I say in self defense. I know He says,
slipping me the winning ticket. 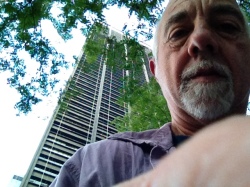