Trudge past the modest houses on acre, half-acre lots
Their azalea or rhododendron jewels overpower them.
Huge maples cloaked on their north trunks
with moss, lichen, tiny white flowers.
Pollen from conifers rains down in concert with my tears.
Enough! Long enough to mourn, too long ago to speak of that.

Cross the narrow old Pacific Highway 19 when it’s safe.
No BC Anna Karenina please.
Then down the narrow road, ditch filled up with wild rose,
golden broom, some white flower, unknown to me,
clover, vetch and wild pulmonaria.
On my left as I stride along, the wide field unploughed.
Beyond the stand of firs, the pebble beach,
the salty Strait of Georgia and far away the chain of snow topped mountains.

Plunge then into the ferny wood to follow Fisherman’s Trail.
Hear on the right Oyster River
rushing over rocks and pebbles.
Bubbling and gurgling and eddying at the bank
over some tree stump, its roots dead but bathed in life-giving water.
Low wavelets form, crest and die away.
Rilling, racing, fed by a ghost glacier and snow
from near-by mountain tops.

Through the cool, shady wood
of dead giants sprouting new growth.
Old mothers suckling saplings.
Tall-mast firs and bushes bright with robins.
Ferns uncoil beside the trail and between the trees, a woodpecker,
black, his red and white head a flag.
Some other walkers with a dog
who licks my hand to comfort me – or himself.

Down through dense lush bush and gorse
to the pebble beach where Oyster River
dilutes the sea salt waters of the Strait.
Branch off to a new trail beside the farm, its split-rail fence in perfect order
above the beach with its own chaotic barrier of drift tide logs and roots
Sea-salt-sun-rain bleached to sculpted forms.
The sky immense, pearl-pale, a gallery of grey
The scent of roses colors it.
Petal-poor Eglantine
pours out the pinkness of morning and the surprise of
orange honeysuckle next to a young fir tree, new growth limp and bright.

Soft whirring makes me turn – emerald green wings, beak busy with the tiny orange horn.
He turns and hovers, flashes me his ruby throat
then, on his way.
Above, the bald eagle I had searched for glides between the firs.
I can turn back now, step quickened with Pacific hope. 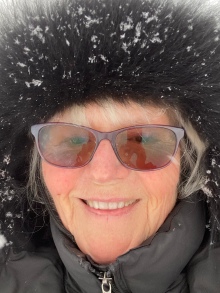 Isobel Cunningham’s poetry and flash fiction has appeared on line and in print. In 2020 she was nominated for the Journey Prize offered by McClelland and Stewart Publishing for a short story originally featured by Agnes and True Literary Magazine. In 2021 she was one of the five writers in residence for the Canadian Broadcasting Company/ Quebec Writers Federation website.