This long metaphor:
mid-October, after a spectacular autumn aspen show,
after a green, healing summer of rain,
some fine fulfillment: the colors,

the names of which do not carry their realness,
the flame, the ochre, the crimson, the gold,
after the riot, after the ecstasy,
after a Bernini St. Teresa of a show –

one freeze, a scatter of snow like veils that melt
to reveal hibernation that at first looks like desolation;
the aspen bones with a bit of brown still fluttering,
a battered bronze lace –

at my mid-point, likely past my life’s mid-point,
I naturally look around at this
and think, this is what it will be like
when they are all gone,

my life, after
the crazy joyful strain of childrearing:
now the unoccupied bird’s nest
on the bare cold branch.

Ah pathetic, pathetic fallacy:
the thinned out sleeping trees,
like stopped music,
are not my life.

And music, the most emotional, also
the most abstract of arts – music is just itself.
The trees are just themselves, so good.
And not a metaphor for anything. 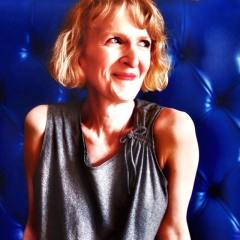 Maria Berardi’s work has appeared in 13 Magazine, Voca Femina, Mothering, the Opiate, getborn and most recently Twyckenham Notes, SOUTH BROADWAY GHOST SOCIETY, 8th st. publishing guild, Luna Luna, Leaping Clear, DASH, Heirlock and most recently in From Whispers to Roars, as well as at the Arvada Center for the Arts and Humanities. Her first collection, Cassandra Gifts, was published in 2013 by Turkey Buzzard Press. She lives in the Front Range foothills west of Denver at precisely 8,888 feet above sea level.