She threw the rest of the cigarette out the window when she got off the exit. It was a mile-long drive from the road to the old man’s house. There were two gates to unlock and prop open with a concrete brick, and from then on it was mostly pasture on one side and a drainage ditch. Half a mile in a creek wound round the other side,its clay bank spiked with alder and vine maple. She sometimes hid here as a child. A coyote, foraging on the creek bank, slunk down the mud road to take a look. The old man is finally dead, she repeated as she slowed down to let the creature pass. Her grip on the steering wheel made both hands ache. She was old. She hurt. Most mornings she had to shake her bones loose like a dog when she woke. The mud road at the curve turned to gravel and crunched under the tires like beef bone in a grinder. A final sharp turn put her at the old man’s house. She parked and sat in the dark. She was alone. He was dead. But if she looked in the mirror her face was his face.  She would knock this house down to the ground. 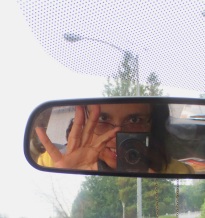 Maria Pascualy recently had a poem accepted by the Mulberry Fork Review. She likes to read Michelle Tea, Patti Smith, Richard Berrigan, E.E. Cummings and Emily Dickinson. Cummings had some unpublished pieces that combined poetry and non-fiction—no lineation—and she is experimenting with that idea.  Her day job is at a museum and she is moving from curating exhibits to writing about things that matter.