It was about noon. I’d made it through this drunk tank/detox Sunday and Monday night and Tuesday morning.  I was still shaking like a motherfucker.  A grubby looking guy, about 50 sporting a week’s worth of stubble, and dirty gray hair asked me if I wanted to play spades.

“Well, don’t worry about it. We’re all a bunch of hardcore drunks.  My name’s Ted.  We’re playing over at that table.”

He motioned to a row of long, beat-up, dark brown Formica lunch tables that could seat about eight.  The chairs were the standard-issue, beige steel card-table variety.  There were two pretty crusty looking guys already seated at the table.  They were both in need of a good bath.

Ted and I sat on opposite sides of the table.

“Yeah, me and Rob will play you two guys.  I forgot your names.”

“Michael,” said the other one.  God, I couldn’t believe it, but he was shaking worse than I was.

He didn’t get any argument.  Besides, he was probably the only one whose hands were steady enough to write in any case.  We were one sorry foursome.

Ted shuffled and slid the deck for Bill to cut.  Bill cut the deck.  Ted restacked it and dealt each of us thirteen cards, we weren’t using the jokers.

As we gathered our cards, Bill’s eyes seemed to roll backwards in his head.  All you could see were the whites.  He made a kind of gurgling sound, not very loud, actually barely audible compared to all the hubbub going on at the detox center.

He then proceeded to fall straight back in his chair and smash his head on the filthy Linoleum covered floor.  He was bleeding pretty good from the back of his head.

Two staff members noticed the commotion, and hustled to where Bill lay on the floor.  Al, the fat one, asked what happened.

“Yeah,  must have had a pretty bad hand,” Ted said.  No one laughed.

Within minutes, the fire department paramedics arrived, and after taking his vitals, put him on a stretcher and left for the hospital.  These same paramedics would be called back within an hour, when a feeble old bum had what must have been a heart attack in the men’s shower.  He was dead when they wheeled him out. 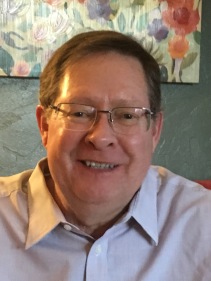 Robert Rickelman was born in Chicago and moved to Tucson in 1995. He earned his B.A. in Spanish from the University of Arizona, which is where he was introduced to the Latin-American genre of Magical Realism. He employs this genre in much of his writing. Robert’s short fiction, “Annie,” appeared in The Bitchin’ Kitsch. His nonfiction has appeared in Inscape Magazine, The Long Island Literary Journal, Twisted Vine Literary and Arts Journal, Blue River Review, Barely South Review, and Dual Coast Review.